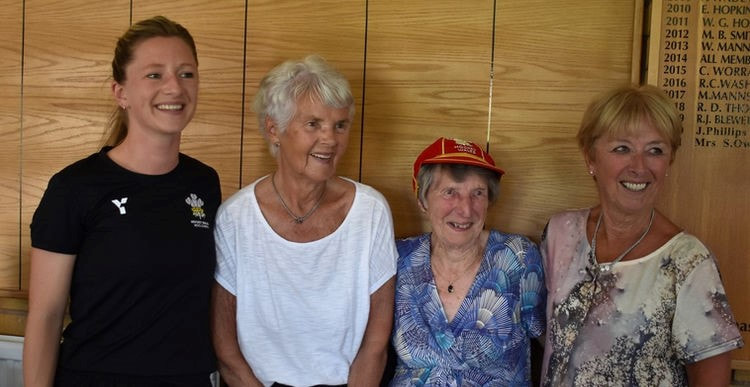 By Phil Bailey
​
Barnwood Bowls Club on the outskirts of Gloucester may seem an unlikely place to be celebrating the history of Welsh International Hockey. However, on Friday 8th July, former Welsh international Sheila Howitt was thrown a surprise 90th birthday party and awarded her Welsh cap.
The celebration had been months in the planning, with mails flying back and forth between the Chair of Barnwood BC Andy Browett, Hockey Wales, and Cap Researcher Phil Bailey. Andy had found out, quite by chance, that Sheila had represented Wales in her youth and contacted Hockey Wales to see if they had any information on Sheila.
From that seed grew an idea, linked to the ongoing Hockey Wales Hockey History Project, to present Sheila with her Welsh cap at her 90th birthday celebration.
Sheila played for Wales in the 1954 season, sixty-eight years ago. She made her capped debut on 20th February 1954 at the Grange Cricket Ground, Edinburgh against Scotland where Wales lost a hard-fought game 2-0.
Sheila then played in the other two Home International Tournament matches of 1954: against Ireland at the YMCA Ground, Belfast on 6th March; and against England at Cardiff Arms Park on 20th March 1954. Both games were lost 5-1 and 10-1 respectively. Sheila played all her games at right half-back and gained three caps for Wales.
A year earlier, Sheila had travelled to the IFWHA Tournament at Folkestone as a travelling reserve. In Hockey Wales records, Sheila is the first Welsh player to be capped from Trowbridge Hockey Club.
Attending to present Shelia with her cap was Sheila Morrow (President of GB Hockey and an exceptional Welsh captain and player), Eirianwen ‘Nan’ Thomas (former Welsh captain and a member of the first GB women’s capped side of 1963 who played with Sheila Howitt in 1954), Phoebe Richards (Hockey Wales three-time Commonwealth Games representative with 120 caps for Wales], and Hockey Wales Cap Researchers Steve Knight and Phil Bailey.
Even when seated at Sheila’s table, she had no idea of the cap party’s true identity…until all was revealed. Andy asked Sheila if she remembered a Nan Thomas from 1954 – which of course she did - only to be told to her great surprise that she was sat next to her and chatting about hockey.
Sheila Morrow made a lovely speech about Sheila and the great history of Welsh Hockey whilst Phoebe presented Sheila with her cap.

Sheila was very happy with her surprise birthday present. Many of the Barnwood guests expressed gratitude to Hockey Wales and the presentation party for making the event happen and bringing such happiness to the club.
The cap presentation, as part of the ongoing Hockey Wales Hockey History Project, will continue this Friday evening at the SWALEC Stadium, Cardiff where more former Welsh hockey internationals will be presented with their Welsh Caps.